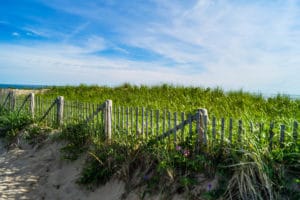 The Cape Cod National Seashore is comprised of over 43,500 acres of ocean beaches, sand dunes,

Begin your Cape Cod journey with a stop at Salt Pond Visitor Center in Eastham. Learn all that the Seashore has to offer in bike trails (Provincelands), nature walking trails (Beech Forest), picnic areas, dune tours, whale watching, fishing, sailing, surfing, exploring the many historic lighthouses of Cape Cod in addition to our miles of pristine beaches.

President John F. Kennedy sign the bill authorizing the establishment of the National Seashore on August 7, 1961 stating at the time how significant it was to “preserve the natural and historic values of a portion of Cape Cod for the inspiration and enjoyment of the people all over the United States”.

The Dune Crest Hotel is nestled within twelve acres of the magnificent Cape Cod National Seashore in North Truro and all of its beauty atop the tallest bluff on the Outer Cape with panoramic views of Provincetown, Cape Cod Bay, Pilgrim Lake, Provincetown Harbor, & the Atlantic Ocean.